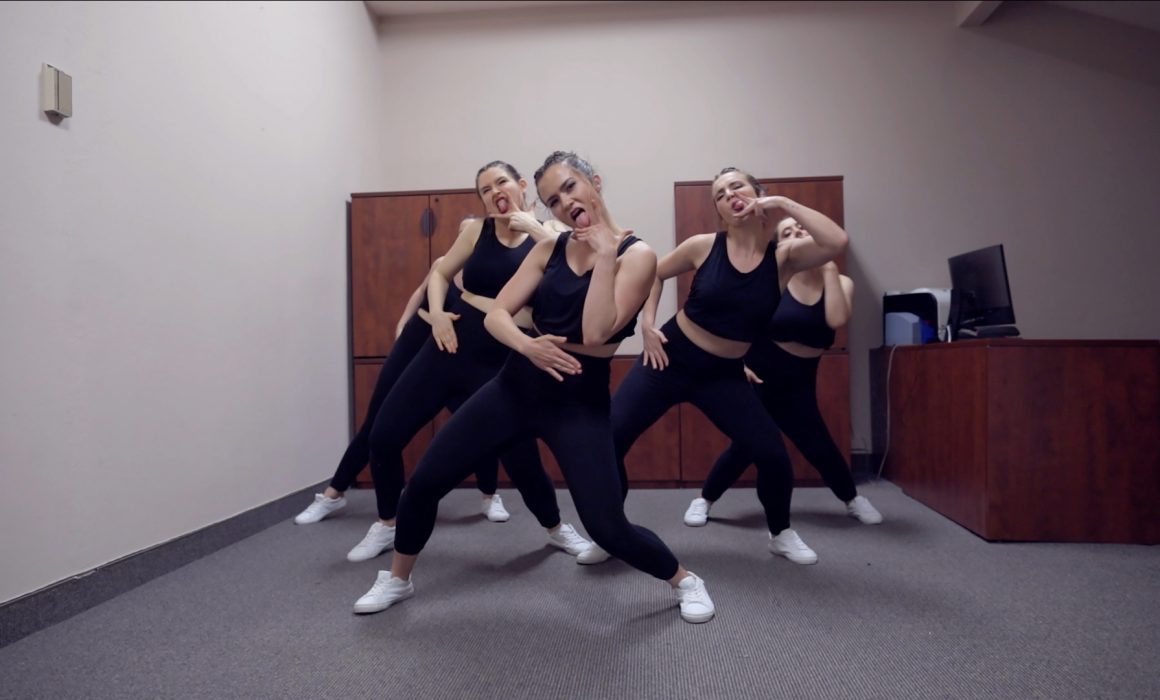 For this post I wanted to go into the primary inspiration for our film Better Than You Doin You (don’t be mad).

For a long time I have played with the idea of creating a ‘non-verbal rap song’ where the dancer stands in as the rapper and her gestures are the lyrics. My choreographic style is highly gestural and often seems verbal with my use of both intricate hand movements and facial expressions so I thought this would be a perfect match of styles. I took the song ‘Sweatpants’ by Childish Gambino, broke the rap lyrics down in terms of rhythmic structures, and then choreographed my movement version of the rap and rhythms. The gestures are characterized enough so, upon closer look, the audience might be able to infer the words that inspired them.

See my discussion of the inspirations for the film in interview with MovieMaker Magazine below!

I wanted this film to look like an ‘elevated music video’. I wanted the filming to highlight the intricacies of the choreography and elevates the dancer as the famed personality, while still maintain a familiar air of the standard music video. I have always had a slight gripe with the general music video filming structure of taking an entire dance sequence, filming it in several locations with different costumes and a few different angles, and then completely chopping it up in post, spreading it out across the music video in-between cuts of the artist singing towards the camera or acting/posing sequences. While thought has gone into the choreography, it has always seemed like more attention could be put on the filming and the integration of the dancing into the story of the music video. So with this film, I set out to make a music video dance-film where the dancing is at the forefront, with all of the camera movements, angles, and edits designed specifically around each movement in the dance rather than long sequences, yet at the same time hold onto some of the quintessential music video tropes for a cheeky and fun reference.

See the music video for Childish Gambino’s Song ‘Sweatpants’ below!

This reference particularly shows in the chorus section: backup dancers magically appear at the start of the chorus to join in, the choreography at the start of the chorus quickly turns simple, easy to grasp, repeatable, and entirely unison, and the camera simply stands there to capture it all rather than being an active participant. There is supposed to be this play between the familiar and the new when it comes to the choreography and filming style.

Hope this gives you a better idea into thought behind the film. Thanks so much for reading and for your support!

We completed the second weekend of our two-weekend shoot for film, INeasyOUTbreezy. We have incredible official behind the scenes photos and videos coming soon but we wanted to give you a little sneak peek in the meantime! Here are some of the shots we took with our phones. You’ll get a taste of some of the backdrops, lighting setups, costumes, crew, and cast that came together to make this shoot a success. Much more to come! Enjoy!

Our main lighting setup designed by the cinematographer: Aakash Raj!

The setup to film the FaceDance
Caroline  watches on the monitor to give performance cues to the dancer Alexa as Katherine calls out the counts to the music for the camera operator and assistant camera operator.

Caroline performing the FaceDance. Because the FaceDance only captures the head and shoulders, dancers can wear whatever bottoms they choose–in Caroline’s case, her pink unicorn pajamas 🙂

Dancer Audrey on the Flower Bed! Some of our most stunning shots came from this simple setup.

Assistant Director Chris and Shot Supervisor Katherine on the right discuss the remainder of the shooting schedule for the day as Caroline directs the Verry Berry Girls on the next shot.

Caroline working with dancer Madelyn on the facial expressions for her upcoming shot.

Our gaffer, Aiden, checks the luminance levels with his light reader to make sure we keep a consistent amount of light between all shots so there is continuity throughout the film.

The theme of the weekend. 8 ‘one more times’ later Caroline calls out again: one more time! I swear this is the last one!

After a delay in makeup and hair pushes back the originally set shooting schedule, Director Caroline Liviakis and Cinematographer Aakash Raj, talk through the shot list to discuss ways they can make up for the schedule delay.

All the Verry Berry Girls!

The three sisters all together! Director Caroline and her sisters Audrey (dancer) and Katherine (shot advisor).

Shooting with the Steadicam!

Press photoshoot at the end of the filming day!

Preparing for extreme closeups. In the first photo, Alexa prepares Caroline’s teeth for an extreme closeup shot and in the second, Audrey and Rocket (the makeup artist), cover Caroline’s armpits with makeup…sounds glamorous right?!

Prepping at the beginning of the day: camera, shoes, makeup, hearts, check!

In our last post we dove into the creation of the most important planning document for a film: the shot list. Now we are going to see that shot list come to life and explore the creative decisions that we made for our debut film: Better Than You Doin You (don’t be mad)! Below I’ll discuss the different shot types and camera movements that we used and how they help to tell the story. Here we go! We begin with an establishing shot: a shot which establishes the scene rather than focusing on individual characters. This is the opening shot of the film so you can see the world the main character is about to enter into.

A full shot (head to toe) of the main character as she walks into the office setting that was established previously.

We use closeups and head and shoulders shots (like the three pictured below) to introduce the office worker characters, show their reactions to the main character, and for the main dancer to ‘interact’ with the audience. Closeups are the best way to showcase the characters and their emotions.

After the closeup introductions to the office workers we cut to a cowboy shot (cut just below the hip line) of the lead dancer. This change from closeups of the extras to a body shot of the lead dancer shows her distinction apart from them and that she’s taking control of the space around her.

Here are two examples in the film of us shooting most of the body and then cutting directly to a shot that is closer up of the dancer performing the same movement. This way we see the dancer set up the full movement with the body and can appreciate the dance’s athleticism. However, we then cut to a closeup so that the finer details like facial expressions and hand gestures can have their full effect.

Here is an example of us racking focus: a trick that directs the audience’s attention specifically from one subject to another while adding subtle drama. As you can see in the first picture to the left Rafael (the office worker), is in focus while Rachel (the dancer) is not. After a few seconds we ‘rack the focus’ so that Rafael is no longer in focus and Rachel is.

Some shots take the face out completely and focus on parts of the body (something especially useful for dance films). One of the more common uses in dance films is to show footwork as seen below.

This is an over the shoulder shot: filming over one character’s shoulder to look onto another subject or setting. It gives the feeling that you, the viewer, are taking on the perspective of the character who’s shoulder you are peering over.

This is the ending shot of the film: a long shot of the lead dancer with everyone else in the backdrop. We started the film showing the lead separate from the workers using the office desks as backdrops. In this final scene she dances with them but the backup dancers and office workers take on the role of providing the backdrop around her. Her backdrop is people rather than props for this final shot.

That’s it for this deep dive-in! I hope you enjoyed learning a bit more of what goes into the artistic process for one of these films! Let me know if you want more posts like this or any other content you would specifically like to learn about. I want to hear from you!

Thanks for reading and for your support!

For this post I thought if would be nice to dive a bit deeper into some of the behind the scenes of making one of our films. Today we are going to talk about my favorite part of the pre-production process: creating a shot list! We will be using our film Better Than You Doin You (don’t be mad) for our examples. A shot list is a detailed checklist that serves as the roadmap for the film’s shoot. The document describes the technical specifications for each shot so all of the crew are on the same page for the demands of each shot, what they are supposed to look like, and how they relate to the overall arc of the film. This is the most important planning document for the pre-production process of a film. It is the the product of the director and cinematographer deciding how they will visually tell the story. Below is a look at the first few shots from our shotlist for Better Than You Doin You (don’t be mad). You can click on the image to enlarge it.

The information you will find commonly among all shotlists is:

Other information that can be included depending on the unique needs of the project is:

On the shoot for a dance film, the word ACTION is not very helpful when calling the start of a shot. The dancers are dancing to specific parts of the music–that music is the real action cue. So for my shot lists, I instead write where in the music the shot begins and ends, and the music counts that the director or assistant director should call before the dancers start.

As you can see below, the shot list is numbered in order of how they appear in the film but are shot in an order that makes sense for an efficient shooting schedule. So shot 1 (the opening shot) is actually the 14th one we shot that day.

So there you have a little introduction into this incredibly important stage for shooting one of our dance films. Make sure to check our next post for a look at how our shot list decisions came to life on screen for our debut film, “Better Than You Doin You (don’t be mad)!

Thanks so much for reading and for your support!