“Ms. Liviakis is so in tune with modernism and is such a cosmopolitan creature.” (BayAreaDanceWatch) 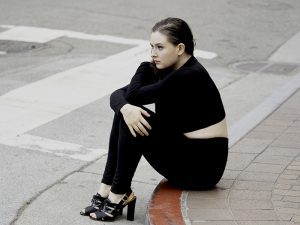 Caroline Liviakis began her journey in dance at an early age through performing in multi-generational, community musical theater. Being a child actor among mostly adults, she was often cast in solo dance roles as a way to be featured. She soon began studying dance more seriously and since then, she has trained in a multitude of styles including ballet, jazz, tap, hip-hop, contemporary, Irish, African, ballroom, and modern dance. These theater roots have shaped the choreographic and performance aesthetic she has developed today.

Liviakis went on to earn a B.A. in Dance, a B.A. in Philosophy, and an M.F.A. in Dance. The year following her completion of graduate school, she embarked on the vision she had for herself in dance: starting her own dance company. Both she and her sister, Katherine, were the company’s first dancers, performing as a guest artist at colleges and showcases in the San Francisco Bay Area and New York. This was the beginning of the Caroline Liviakis Dance Company (CLDC).

As the Artistic Director of CLDC, Caroline has been featured in the: San Francisco Chronicle, Marin Independent Journal, Skyline View, The Ark, BayAreaDanceWatch, backstage.com, and SF/ARTS Magazine. She has been interviewed on camera for MovieMaker Magazine and as the featured artist for ‘Inside Levysalon’. Her debut evening-length work, There’s A New Kid In Town, was selected as a ‘Critic’s Pick’ for the San Francisco Chronicle and her directorial debut film, Better Than You Doin You (don’t be mad), won the award of ‘Best Dance Film’ at the Hollywood New Director’s Film Festival.

Alongside her work as a choreographer and director, Caroline also works as a dance educator having taught at: St. Mary’s College of California, Napa Valley College, Skyline College, College of Marin, and Mills College. She was the guest choreographic artist for Skyline College’s Spring 2018 semester and a featured speaker for the 2017, 25 Points of View: a peek into dance-making, at the Luna Dance Institute.

Her main goals as an artist and company director are: innovating and expanding the use of choreography of the face, developing an aesthetic that is theatrically-founded while also highly technical and athletic, creating truly thought-provoking and logically founded work, and inspiring enthusiastic involvement in live dance performance from untapped audiences, particularly youth. She wants to embody a bold and new vision for an artistic director.